Yellowjackets, Hornets, Bumble Bees, & Honey Bees are the stinging insects which quickly come to mind as a risk. They live in colonies with hundreds or thousands of individuals, each capable of stinging a person or pet. Wasps aggressively defend their colonies against any disturbance. Africanized honey bees are especially aggressive and special precautions in dealing with them will be described later in this release. 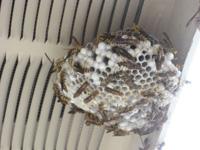 PaperWasps are also social wasps, however, they are not nearly as aggressive as yellowjackets or hornets. The nests of paper wasps contain only a small number of wasps and are usually located in exposed areas allowing proper treatment from a safe distance.

Muddaubers are solitary wasps, i.e., they do not live in colonies. These wasps build mud tube nests on walls, under decks and in attics and crawl spaces. They are usually present in small numbers and are generally not very aggressive. In fact, muddaubers frequently are not present when treatment is made to their nest site.

Cicada Killers are large orange, yellow, and black wasps which hunt cicadas, paralyze them and place them in nests in the soil as food for their larvae. Each female wasp digs her own tunnels in suitable soil in areas which possess prime nesting conditions. Large numbers of cicada killers are often present. The male cicada killer flies above the nesting sites to ward off potential predators; however, it is not a stinging threat because it does not have a stinger. The female can sting but is generally too busy digging the nest and searching for food to be provoked into attacking someone. Still, any property owner who has 15, 30, or 50 of the large males flying about their lawn is likely to be concerned, and often wants the wasps killed.

Carpenter Bees are solitary bees which construct nests in exposed wood. The female constructs the nest while the male flies guard duty outside the nest. Like cicada killers, the male carpenter bee is incapable of stinging; however, they often frighten a passerby by buzzing by their heads. The females are too busy with nest building to be provoked into stinging and are often not present when treatment is performed.

Contact us today for expert exterminator help with a wasp, bee or stinging insect nest/infestation in your Vancouver, Richmond, Surrey or Burnaby, BC home or business.