Black widow spiders are black, with characteristic red hourglass on back, having 8 legs, round, and 3/4 “long and 3/8” in diameter.

Black widow spiders spin their webs near ground level. They often build their webs in protected areas, such as in boxes and in firewood.

Black widow spiders are often found around woodpiles and gain entry into a structure when firewood is carried into a building. They are also found under eaves, in boxes and other areas where they are undisturbed.

Avoid black widow spider bites by wearing heavy gloves when moving items that have been stored for a long period of time. Spiders often hide in shoes, so check shoes and shake them out before wearing. When spider webs are visible, use caution before putting your hands or feet in that area. 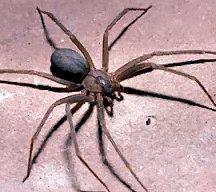 Brown Recluse Spiders are light to dark brown in color, with characteristic dark brown violin marking on back. They are round, having 8 legs and 5/8 inches long.

Brown recluse spiders often live outdoors in debris and woodpiles. They can be found infoors in storage areas and dark recesses.

To avoid brown recluse spiders, avoid keeping clothes on the floor. Store clothing and shoes inside plastic containers, and shake out all clothing that has been in a hamper before wearing or washing.

Contact us today and our spider exterminator will help with a spider infestation in your Vancouver, Richmond, Surrey or Burnaby, BC home or business.